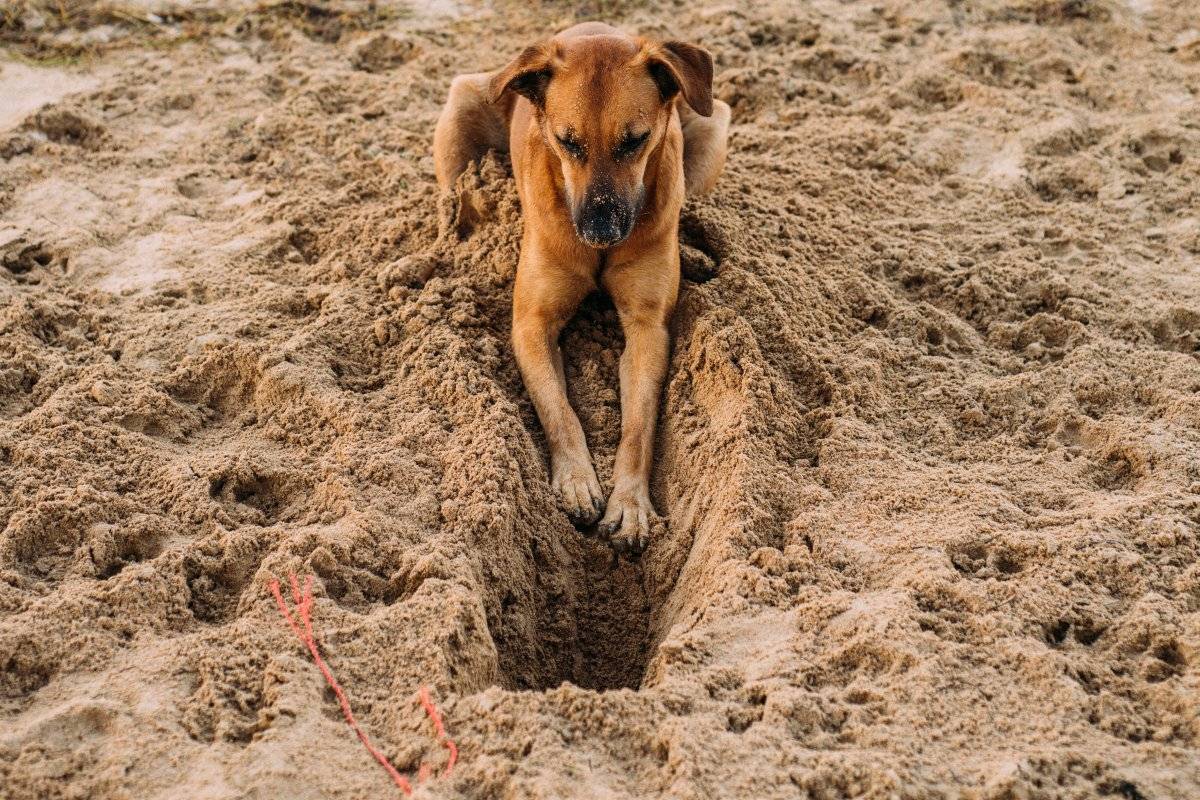 Skeleton (TOC) dig out the bones
Why do Dogs Dig Holes & Bury Things?
Why Dogs Bury Valuable Objects
Why Does My Dog Keep Digging Holes in My Yard?
Stress Digging
Coping with Separation Anxiety
Is Too Much Digging Harmful?
What Dog Breeds are Most Likely to Dig?
Digging for Comfort
How Can I Stop the Digging?
Physical Needs
Mental Needs

Why do dogs dig holes and bury things?

The question can drive a pet owner mad! Why in the world is my dog destroying my yard, digging so many holes? Why are all the dog toys buried beneath the ground, rather than in that toy basket where they belong?

Dogs dig holes & bury things, or simply dig, for four main reasons (though there are more).

Which reasoning is the cause of your dog’s digging?

You’ll need to determine the reason before an effective treatment plan can begin!

Written by The Editors.

Imagine a wolf out hunting in the wild.

Your wolf’s efforts have paid off, and he’s killed his prey! Your wolf, along with other family members, share in the kill until only a few pounds of meat remain.

This wolf decides to save the rest for later, but there is only one problem. He isn’t the only predator around that would love to finish off this snack!

Your wolf has two choices.

He can stand guard over the rest of his kill, unable to do much of anything else.

He could also bury the remaining meat, both hiding the scent from other animals who would gladly steal it while allowing him to attend to other things!

Even today, wolves out in the wild will bury remaining food they don’t eat right away.

This way, other animals can’t find and steal their prize!

Wolves will sometimes go for days without a meal, so these ‘resources’ are very important to them.

But why do dogs dig holes and bury things?

The answer (or one of them) is simple!

Dogs are instinctual animals, making many decisions based on instinct.

Because they have evolved from wolves, many dogs retain these genetically ingrained instincts!

Our dogs might also bury toys, bones, or anything else they consider valuable resources of theirs.

Even though you would probably never actually steal your dog’s things out from under him, he might still feel that instinctual drive to bury his things.

For the owners who do snatch things away, now you have your answer! Your dog is probably afraid you will ‘steal’ his resources.

Dogs don’t have hands like we humans do. Unless trained (which is possible!), they can’t open drawers or baskets, placing toys or leftover food in for protection.

So how do they keep these valuable items safe when they aren’t around?

While they can’t open drawers, many dogs are very adept at digging! Inface, several hunting breeds were specifically bred for this very purpose.

Many northern breeds would gladly burrow a small mound in the snow, sleeping outdoors at night! Just to be safe, your own dog probably shouldn’t be spending a winter night outdoors.

Digging a hole to bury valuables so other dogs or humans can’t find them is a natural solution!

We might notice the hole and know exactly where something is buried, but the minds of our dogs don’t work that way.

Resource guarding is exactly what the word implies. Some dogs can become so afraid other dogs or humans might steal their valuables (food, toys, etc.), they can become aggressive.

For example, food aggression is very common! Some completely well-behaved dogs may become aggressive, snarling and snapping, even actively biting, when others approach while they are eating.

It isn’t their fault! Your dog isn’t a ‘bad, broken dog’, and he doesn’t hate you, just because he may be food aggressive. This is very natural. Like we said earlier, resource guarding is an instinctual response.

Wolves once relied on this instinct for their very survival!

So how do you avoid this? It is simple!

Why Does My Dog Keep Digging Holes in My Yard?

Under-stimulated, bored, or overly energetic dogs will often turn to destructive habits to expend some of that pent up energy!

Digging is a common problem in dogs that can’t fulfill their energy demands.

For example, many Siberian Husky owners often complain of excessive digging! This is a breed that was bred to work all day long, and they have an immense amount of energy.

Before looking for other solutions, ensure your dog is well exercised if you want to prevent excessive digging. Though not always, this will usually help the problem.

Depending on the energy level of the breed, exercising could mean much more than one walk a day!

Overly anxious dogs will sometimes dig to help relieve stress. Digging would be a common behavior issue for dogs suffering from separation anxiety, especially if that dog is penned up outside!

These dogs could be digging to escape some type of confines to reach their owner, or simply digging out of extreme stress.

Let’s cover separation anxiety very quickly, so you can help stop your dog from digging due to it.

The meaning of the word is exactly what the word implies; dogs that become anxious when separated from their handlers.

You would prevent this issue the same way you would treat it. Slowly desensitize your dog to absences over time, allowing him to gradually adjust to solitude away from the owner.

Besides punishment, the worst thing you can do is immediately submerge a dog that is only used to constant companionship into several hours of separation.

Is Too Much Digging Harmful?

Digging holes and burying valuable objects (that your dog considers valuable) is a natural tendency and normally isn’t harmful to anything but your yard!

Some dog breeds can learn to dig holes underneath their fences, escaping your yard.

This results in a loose dog, which can be harmful to either your pet or other animals, or both!

You have two options to deal with this:

Sometimes a solid fence base is necessary. Understand some breeds were bred to feel the need to dig, and that instinct is extremely strong in them!

Excessive digging can become a compulsive behavior (think OCD in humans), which can result in damaged or injured paws.

This is more common in anxious dogs.

What Dog Breeds are Most Likely to Dig?

Think of various Terrier breeds, or Dachshunds, bred to dig or follow prey underground. Digging will come very naturally to these dogs!

This isn’t a guarantee they will dig, but they are more likely to want to dig more than other dog breeds.

Various northern breeds, like Siberian Huskies, would burrow holes within the snow to sleep in, the holes themselves offering protection from frigid winds.

Their dense coats are all but waterproof, so sleeping amidst surrounding snow wouldn’t be much of a bother.

Those northern breeds may feel the desire to burrow holes in your yard!

Your dog might be burrowing a hole to lie down on the nice, cool ground for comfort in hotter weather.

This can even provide shelter from the elements (wind, rain).

Is your dog too cold or too hot?

Is it extremely windy outside?

This is more common in Nordic breeds that will naturally burrow holes within their snowy environment for protection from the elements but can be present in all dogs.

How Can I Stop the Digging?

In order to help stop the digging, you’re going to need to figure out why your dog digs holes and buries things.

Once you figure out the cause, you can begin to treat your problem.

If your dog is worried about his resources, treat the resource issue. If he has excessive anxiety, treat the cause of the anxiety.

If your dog is under-stimulated, provide more enrichment.

By under-stimulation, we mean both mental and physical.

While the wolf in the story above is constantly burning calories and expending energy in the hunt for food, our domesticated dogs are given everything they need with often no effort on their part.

A surprisingly large number of domestic pets never get the desired amount of exercise they need!

Mental stimulation is very important to keep a dog happy!

Play plenty of mentally stimulating games with your pup, forcing him to use his natural senses!